On Thursdays, we read reviews or news stories about art or design and study the language used to describe them. This week’s article is about Ryan Coogler, who directed Black Panther for Marvel. 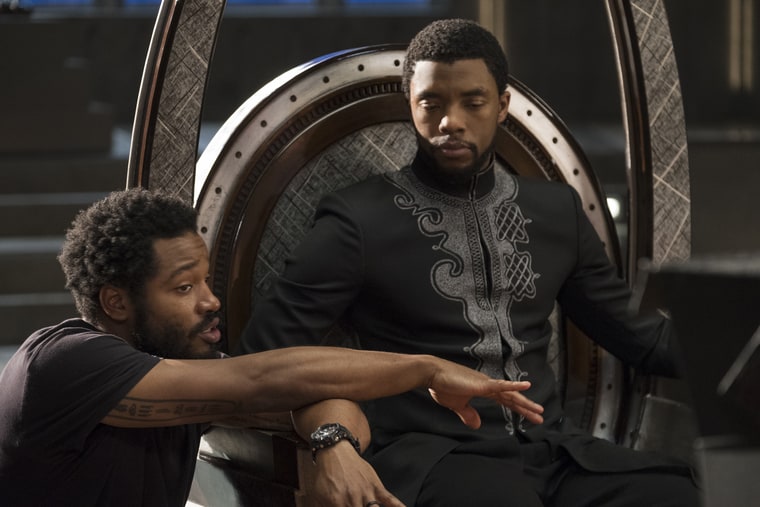 Here are the beginning paragraphs from Rolling Stone:

It was late 2015, and director Ryan Coogler was feeling the call of Africa.

Coogler, then 29, was just finishing up his second film, the soon-to-be-a-hit Rocky reboot Creed. He was starting to think about what came next. “I was grappling with something I’ve kind of been scraping at my whole life,” Coogler recalls, “which is my cultural identity, and what it means to be African. I was reading Ta-Nehisi Coates’s work, getting ready to dive into that for personal reasons. And I’d been wanting to visit Africa,” he says. “I had never been, and I felt ashamed that I had never been. So I was like, ‘As soon I finish Creed, maybe [my wife] Zinzi and I can take that trip.’

As millions of fans are now very aware, the studio was calling about Black Panther, currently demolishing box-offices worldwide. The film, about the titular superhero-king of the fictional African nation of Wakanda, raked in nearly $250 million in the U.S. last weekend, the second-biggest four-day opening of all time (just after Star Wars: The Force Awakens). It has already grossed over $700 million globally, and it seems all but guaranteed to hit a billion at some point. Meaning what’s next for Coogler is now: whatever he wants.

Yet when Marvel called, Coogler was no blockbuster director, but a promising young filmmaker with just two features to his name: the aforementioned Creed, and 2013’s Fruitvale Station, the powerful story of the killing of a young black man by police in Oakland, which he made for just $900,000 – less than what Black Panther probably spent on catering. But the character and the world fit perfectly with the stories he always loved – first as a comic-book fan growing up in Oakland, and later as an aspiring student filmmaker at USC. “I wanted to tell epic stories, stories that felt big and fantastic,” Coogler says. “I liked that feeling as an audience member when it felt like I went on a flight and felt out of breath and I couldn’t stop thinking about it days later. I wanted to make stuff that gave people that feeling – but I wanted to do it for people who look like me and people I grew up with.”

In the first full paragraph, the author describes where Coogler was at with his career at the end of 2015. He uses the term finishing up, which is really no different from finishing. The phrase what came next, means he was thinking about what he would do next in his life/career. Coogler uses the word grappling in his quote, which means to fight with something and is often used to describe how people struggle with their feelings. He also uses the phrase scraping at to mean he’s been trying to understand it (his cultural identity) for a long time. He talks about Ta-Nehisi Coates (an author who writes about African-American cultural, social, and political issues), then he uses the phrase to dive into, which means to start doing something with enthusiasm.

In the second full paragraph, the author describes Black Panther, and how successful it has been. He uses the phrase are now very aware, which just means they know. He also uses the word demolishing to mean that the film is breaking many records for how much money it is making at the box-office. He describes the main character as titular, which means his name is the title. He also uses the phrase raked in to mean collected. He talks about how much the film grossed which means the money the film made before taking out taxes or expenses. The phrase all but guaranteed means that there’s a very good chance that it’s going to make a billion dollars. The last sentence means that because Coogler was so successful, he can do anything he wants for his next project.

In the third full paragraph, the author talks about how inexperienced Coogler was in 2015. He describes Coogler as promising which means that he was expected to succeed. The phrase to his name means with his name on them – the things he had done or made. Aforementioned is just a long way to say that something was mentioned before in the article. The author describes Coogler as aspiring which means he wanted to become or achieve something. Finally, Coogler uses the phrase out of breath to describe the feeling of being so excited that you can’t breathe, which is what he wanted to convey in this film. I think he succeeded.

To read the original Rolling Stone article, written by Josh Eells on February 26, 2018, click the link below:
https://www.rollingstone.com/movies/features/ryan-coogler-why-i-needed-to-make-black-panther-w517100