On Thursdays, we read reviews or news stories about art or design and study the language used to describe them. This week’s review discusses the National Theatre production of The Great Wave, written by Francis Turley. 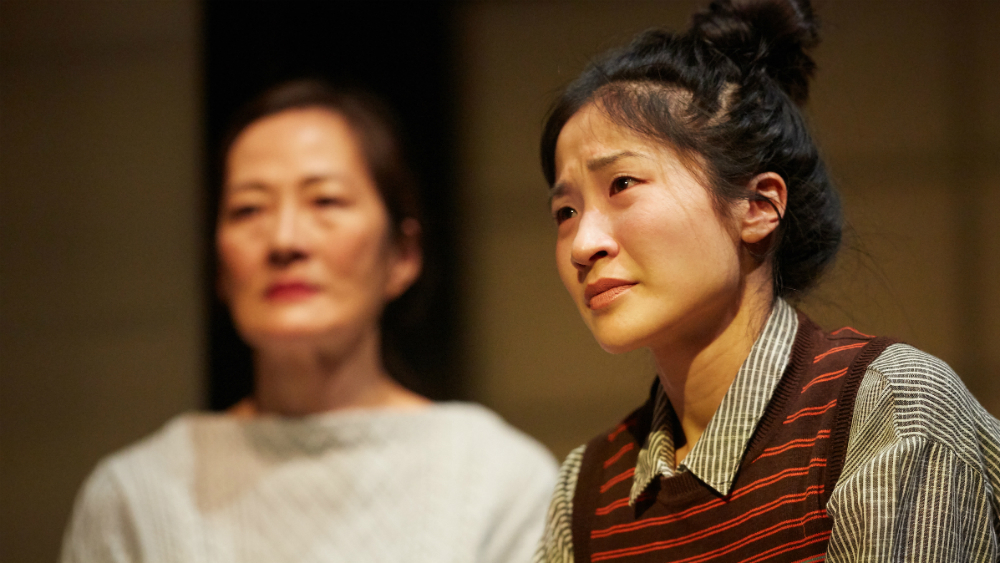 Here are the first three paragraphs from Variety, in italics.

It’s nothing if not timely: Francis Turnly’s epic international mystery “The Great Wave” takes us into the soul of North Korea. A tale of two sisters – best of times, worst of times – this National Theatre production splits a family up across two very different nations to show just how much our lives are shaped by society.

In a Japanese coastal town in 1979, 17-year-old Hanako is swept out to sea. Her sister Reiko swears she saw three men on the beach and, with her mother Etsuko and her best friend Tetsuo, dedicates her life to the hope that Hanako might have survived.

She’s right – sort of. Kirsty Rider’s headstrong Hanako wakes up in a North Korean cell. Enlisted to train North Korean spies to pass for Japanese, she’s forced into a transformation of her own, both learning Korean and kowtowing daily to the Great Leader’s image. It’s an obliteration of the self, as communism dictates, but it’s never wholly clear whether Hanako’s acting out of necessity or indoctrinated for real.

When reading something complex, like a review, it’s a good idea to practice chunking. This means breaking a sentence into chunks, which are pieces or thought groups, to understand them more easily. I often use chunking to break down sentences when I talk about a review or a news article. It is easier than trying to understand the whole sentence at once and more meaningful than looking at single words alone.

Let’s begin with the first sentence – It’s nothing if not timely. This expression, it’s nothing if not ______, is commonly used to emphasize the adjective when describing someone. For example, he’s nothing if not charming means he’s really charming. She’s nothing if not generous is the same as saying she’s really generous. So this play is timely, which means it is happening at the correct or most useful time. The next sentence contains a cultural reference to Charles Dickens, a famous English writer from the 19th century. A tale of two sisters – best of times, worst of times – references his novel A Tale of Two Cities, and the first line begins with “It was the best of times, it was the worst of times.” By using this story as an introduction, readers can assume there are similarities between it and this play. In the second part of this sentence, the writer uses the phrasal verb split up, which means to break apart.

In the second paragraph, the writer uses the phrase swept out to sea, which means taken out to sea by the waves. It’s common to use swept to mean something moves you beyond your control, like he was swept up by a tornado, or she was swept away by her emotions.

In the third paragraph, we see the expression sort of. It means partially or somewhat. We also use “kind of” in this way. Kirsty Rider is the actress playing the role of Hanako, and we see another phrasal verb in the second sentence – wakes up, which means to stop sleeping. In the next sentence, we see the phrasal verb pass for, which means you pretend to be something you’re not. So in the first half of that sentence, we learn that Hanako has been forced by the North Korean government to train their spies to act like they are Japanese. In the second part of that sentence, we see the word kowtowing, which means to follow someone eagerly. In the final sentence, we see the word obliteration, which is another way to say something has been destroyed completely. We also see the words necessity, which means something is necessary, and indoctrinated, which means you believe the ideas of a group without question. So this last sentence tells us that Hanako totally changes to become what the North Koreans want her to be, but we never learn if this is an act, or if she really believes in what she is doing.

To read the original review, written by Matt Trueman for Variety on March 20, 2018, click the link below:
http://variety.com/2018/legit/reviews/the-great-wave-review-play-national-theatre-1202731746/