On Thursdays, we read reviews or news stories about art and study the language used to describe them.  Today we’ll look at a review from The Telegraph about figurative painter Peter Doig’s current show at the Michael Werner Gallery in London. His painting Two Trees is below. Below in italics are the first three paragraphs from The Telegraph, with my explanations after each one:

Back in the Nineties and early Noughties, when painting appeared to have been rendered obsolete by the dead sharks and unmade beds of YBA conceptualism, Peter Doig was almost alone in creating paintings that were at once bracingly contemporary and rooted in his medium’s rich and complex traditions. The Scottish-born, Canadian-raised, Trinidad-based painter’s slightly sinister, multi-referential paintings of lakes, canoes and Caribbean jungles proved irresistible to both gallery-goers and collectors, with the sale of his White Canoe for $11.3 million in 2007 making him the world’s most expensive living artist.

In the first paragraph, the author refers to the Nineties (1990-1999) and the Noughties (2000-2009) as a time when painting appeared to have been rendered obsolete by the dead sharks and unmade beds of YBA conceptualism. What this means is that painting was no longer seen as important because of the work being done by a group of conceptual artists called the Young British Artists (YBA). Two of their most famous works are the dead shark and the bed he mentions; you can see images of them on the YBA Wikipedia page.

He says that even though Doig was not getting a lot of attention at this time, he was painting in a way that was both traditional and very modern. He uses three hyphenated words to tell us that the artist was born in Scotland (Scottish-born), grew up in Canada (Canadian-raised), and now lives in Trinidad (Trinidad-based). Then he tells us that Doig painted lakes, canoes, and jungles that looked slightly dangerous and contained a lot of references to other things. Gallery-goers, (the people who visit galleries), and art collectors really like his work, which is why the author calls him the world’s most expensive living artist. (See his $11.3 million painting, White Canoe, below.) 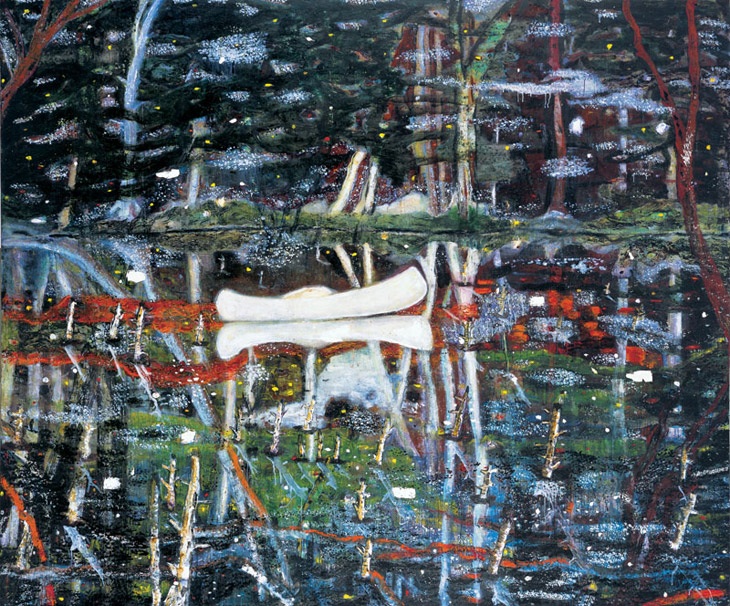 Now, with painting resurgent – or so I’m frequently told – Doig is cited as a prime influence by current hot names such as Hurvin Anderson (shortlisted for this year’s Turner Prize) and Michael Armitage (currently winning plaudits at the South London Gallery). So this show of recent work is an opportunity for the 58-year-old Doig to demonstrate that he is not just an éminence grise for the young guns of today, but still a major force in his own right.

In the second paragraph, he says that now painting is becoming popular (resurgent) again, and so many currently popular (hot) artists are saying that Doig inspired them. He uses the word shortlisted to mean that Hurvin Anderson is one of a small group of people who might win the Turner Prize. He also uses the phrase winning plaudits to mean getting praise or approval. He also uses the phrase éminence grise, which means someone is a respected authority on something, and young guns, which means the powerful young people.

The fact that the show’s central work, Two Trees – so large the gallery windows had to be removed to get it in the building – is still wet on the canvas, gives the sense of an artist painting his way back to the forefront, almost literally before our eyes. And the painting, showing three mysterious figures framed against a moonlit sea, makes a dazzling restatement of Doig’s key strengths.

In the third paragraph, he uses the word central to mean the most important work in the show. He’s saying that because the very large painting that’s the center of the show is still wet, it shows that this artist is in the process of coming back to a place of importance, the forefront. He uses the phrase before our eyes to mean that it is right in front of us. He then describes the painting and says that it is a reminder (restatement) of what makes Doig a great painter.

What do you think of this review? Which phrases do you like best? Do you have questions about the vocabulary? Do you want to suggest a review for me to discuss next week? Leave a comment below!

To read the original article, written by Mark Hudson on December 16, 2017, click the link below:
http://www.telegraph.co.uk/art/what-to-see/peter-doig-michael-werner-gallery-review-proof-significant-figurative/