On Thursdays, we read reviews or news stories about art or design and study the language used in them. This week’s article from Artsy is about an exhibit of 16 Burning Man artists who have installed their work in the Smithsonian’s Renwick Gallery in Washington D.C. 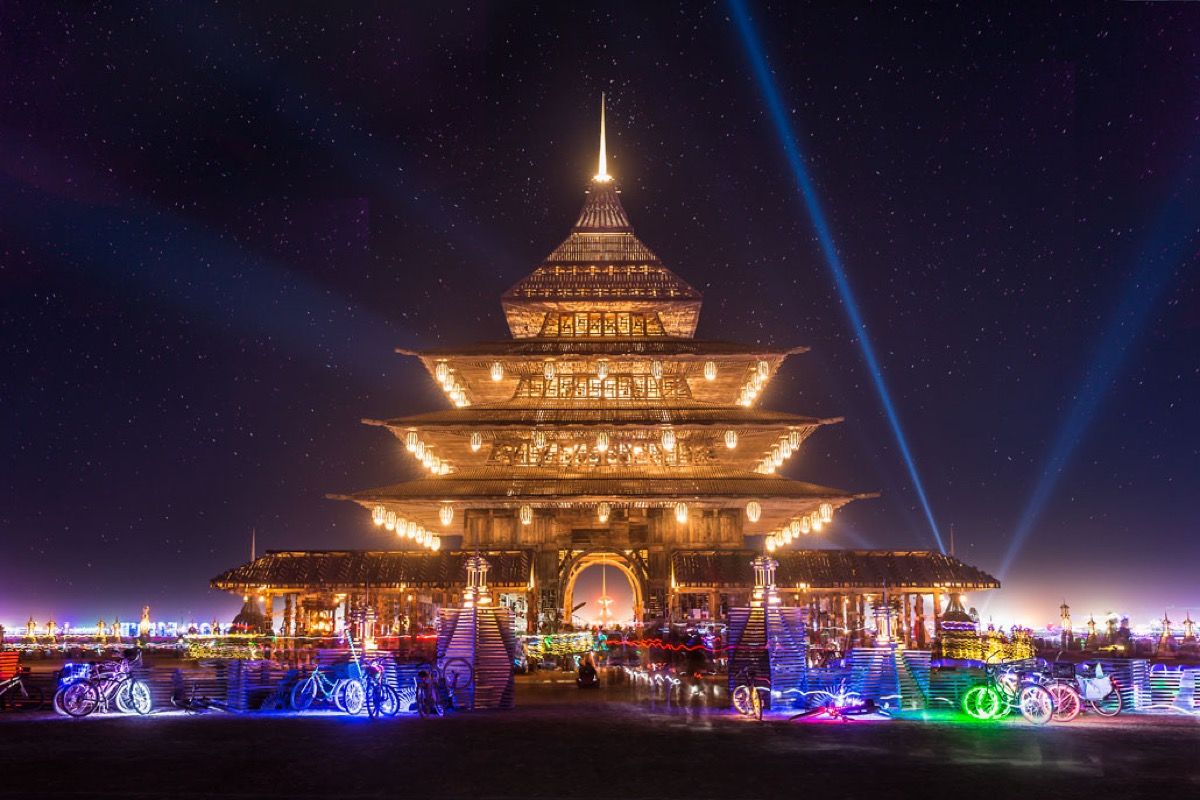 Burning Man is an annual event where 75,000 people create a temporary city built in the Nevada desert. It is a seven-mile square plot of land known as Black Rock City, and the event lasts the entire week before Labor Day. Burning Man is famous for all-night parties set to electronic music, but it is much more an art festival and experiment in temporary community than it is a marathon rave.

Artsy asked the artists participating in the exhibit to describe their work, and what it means for Burning Man’s alternative culture to be presented at an art museum in the nation’s capital.

Here is the response of one artist, David Best, in italics.

1. Tell us a little bit about the piece you’re installing in D.C., and your background creating works at Burning Man.

It’s a large temple structure made out of plywood, similar to the temples that I’ve built in the desert. It’s about 90 feet tall. It has a large chandelier and four altars. I’ve been going to and working with Burning Man for 18 years, and have built eight temples in the desert.

2. What does it mean for the art and culture of Burning Man to be exhibited at—and canonized by—a national institution like the Smithsonian?

I think Burning Man is taking it very seriously. Right now, given the climate we have in our government and in our country, is a very important time for Burning Man to be exposed to the larger public. I think it’s going to help spread its principles to the outside world. I was talking to someone from the BBC about the difference between the art that comes from Burning Man and the art that comes from the general public—nothing at Burning Man is for sale. The work that people make in the desert doesn’t have a value on it. There’s no market value on what I do, or on what other artists at Burning Man do. It’s a gift, it’s designed not to sell in the commercial market but to share with the community. And people are amazed at something that’s built not for sale, not for profit.

3. What do you hope visitors to the exhibition will walk away understanding about Burning Man?

I hope that the Burning Man community can be gracious enough not to be haughty and act as if they know something other people don’t know. I hope that our community isn’t as arrogant as the contemporary art community is, or as the general outside world is—that they are more superior, more knowledgeable than anybody else. I hope that people will think “Oh, these people make art for us”—it’s not exclusive, it’s inclusive.

In question one, the artist describes his installation and how it compares to what he’s created in past Burning Man celebrations. Question two is a little more complex. It’s talking about the culture of burning man, which is often described as alternative, or nontraditional. Canonized is a word that usually means someone in the Roman Catholic church has become a saint, or a holy person. Here, the writer uses it to mean that because the Smithsonian is such an important and well-respected museum, it gives Burning Man art and artists more respect to be shown there as well.

In the artist’s reply to question two, he says the Burning Man community is taking it very seriously. To take something seriously means that you are very serious about it. You’re not joking about it. He also talks about the climate in the government and country. Usually, climate means the weather, but here he means the attitudes and beliefs of the people in power, like our government leaders. Since more conservative people are in power right now, it’s important that an alternative group has the chance to share its work with the general public (which means regular people). He also talks about how important it is that none of the Burning Man pieces are for sale, and mentions market value, which means the price something will sell for.

The last question asks what visitors will learn (walk away understanding) from the Burning Man exhibit. The artist says that he hopes the Burning Man community, meaning the people who usually go to Burning Man, will be gracious (polite) about sharing the artwork with other people. He hopes they aren’t haughty, which means you think you are better than someone else. He thinks that the contemporary (current) art community and the outside world are arrogant, which is the same as haughty. He wants people to see his community as inclusive, including others, instead of exclusive, excluding others.

It’s not always easy to describe your artwork and the things that motivate you to create it.  This is especially true if you are talking about complex issues like culture or politics. A good language coach can help you to find the correct words and phrases to get your meaning across and connect with your audience.

To read about the other artists in the original article, written by Artsy Editors on April 10, 2018, click the link below:
https://www.artsy.net/article/artsy-editorial-16-burning-mans-artists-showing-work-smithsonian

To learn more about Burning Man, click the link below:
https://simple.wikipedia.org/wiki/Burning_Man