On Wednesdays, we look at artist statements or design philosophy statements and discuss the best vocabulary to describe an artwork or design. Today’s piece is an oil painting by Scott Naismith of Glasgow, Scotland, called ‘Primary Sky.’ 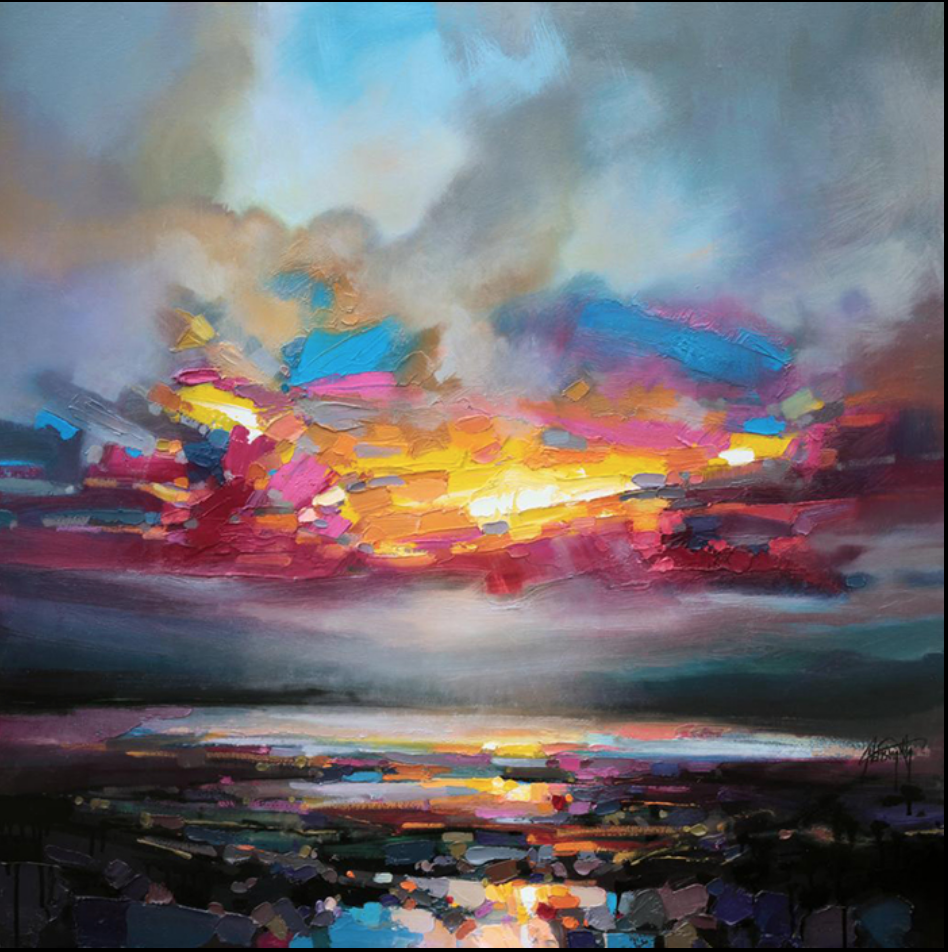 Here is the text from his Artist-A-Day About page, in italics.

With the ambition to become an artist, Scott studied at Duncan of Jordanstone College of Art, Dundee. In June 2000 he left with a BDes in Illustration and printmaking. Since graduating Scott has been a full time artist, working from his studio in Glasgow. Much of his time is spent travelling around the country looking for inspiration for another take on the Scottish landscape. The many lochs, glens and isles of the West coast are amongst his favourite subject matter for his vibrant and atmospheric oils. Since 2003 Scott has also been a part time lecturer at the Creative Arts Department of Reid Kerr College, Paisley.

Scott uses vivid colours in a vigorous application to represent the fast changing light conditions of the West coast of Scotland. Colour use often becomes an entirely emotional response to the subject while tone can remain representational. The love he has for his native Scottish countryside is portayed in his work through an ebullient energy with which he handles the colour with pallette knife and brush.

Scot describes his work by saying, “After 10 years of painting the Scottish landscape, my recent work now becomes more involved with cloudcover and its effect on light and colour through both its translucent and opaque properties. Clouds are visible masses of water droplets or frozen ice crystals suspended in the atmosphere . They have the ability to refract and reflect, creating an ever changing perception of light which inspires my use of colour. I am constantly refering to the paradox of a cloud’s peceived weight and its fragility and the relationship between the cool and warm colours created by it. I have become increasingly interested in catching the moment when heavy overcast clears to reveal clear blue sky, a cool colour that complements the warmth it brings. While the most obvious manifestation of light refraction at this time would occur in the form of a rainbow, I will be concerned with accentuating the infinite, more subtle effects.”

First, let’s take a minute to look at the structure of this artist statement. Naismith begins by giving us some information from his bio and talking about what inspires him as a full-time artist. In the next paragraph, he talks about his style and his process. In the third paragraph, he talks about his recent work and what he hopes to accomplish with it. These are all important points to include when writing a good artist statement.

Next, let’s look at the words he uses. In the first paragraph, he describes his work as vibrant and atmospheric. Vibrant means bright and colorful, and atmospheric means something that describes the atmosphere, or the space around us – often the sky. Since his paintings are colorful depictions of the sky, this is a perfect way to describe them. He also uses the phrase for another take on the Scottish landscape. We use take as a noun this way to mean another way of looking at something: a new take on…, a different take on…, a fresh take on… something. He also talks about the different types of landscapes that he paints as his subject matter.  Lochs, glens and isles are Scottish words for lakes, valleys, and islands.

In the second paragraph, he describes his painting process as a vigorous application, which means he applies the paint with a lot of energy and strength. Next, he talks about how he uses bright colors to show his feelings about a subject, but he tries to keep the tone of the color true to real life. He tries to show his love for his country with ebullient energy, which means it is very lively.

In the third paragraph, he talks about the effects of clouds in his paintings and how they change the look of the light and color. He describes what clouds are made of and talks about how they refract (bend) and reflect light which changes the way the light looks and the color he uses. Next, he says, I am constantly refering to the paradox of a cloud’s peceived weight and its fragility. A paradox is made up of two opposite things that are together, and here he’s talking about how a cloud looks heavy and yet is still fragile. He also describes the opposite colors that are created by this paradox. He talks more about complementary warm and cool colors in the next sentence. In the last sentence, he says that the most obvious manifestation of light refraction at this time would occur in the form of a rainbow. This means that the most noticeable example of light refraction is a rainbow. He finishes by saying that instead, he wants to show and bring attention to the many more subtle effects of light, which means the effects that are not as easy to notice.

What do you think of this painting and the artist statement? Do you agree with my comments? Do you have questions about the vocabulary? Do you want to suggest a piece for me to discuss next week? Leave a comment below!